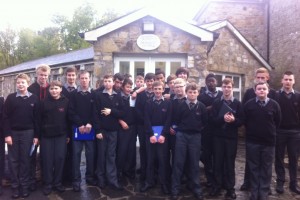 On the 9th of October 2014, the class of St.Brendan’s went on a C.S.P.E. action project to the main ISPCA centre in Longford.

We left the school at ten to nine and enjoyed two hours of sitting on the bus. The centre was difficult to find, though when we finally found it we were impressed by our first sight of the stable and their occupants.

Within five minutes of our entry we were greeted by one the workers there, she gave us some statistics and information about the ISPCA and what it does, such as that 22 dogs go through Irish kennels every day, that is about 8030 dogs per annum, that they care for all animals, that the animals they have are of perfect quality, that they will do every medical requirement and that they search for the household that bests suits the animal in question.

We were first shown the cattery, where the cats are kept. Many of us were amazed by how perfect the cats were, few of them having any physical deformities and all of them being relatively good natured.

Then we were shown the kennels, which were much the same as the cattery, housed with good-natured animals, who had mostly been mistreated by their previous owners, we were shown puppies, who had been confiscated from their owners at a local fair. We were also shown Leroy, a mastiff who was strong yet gentle, though we were told that he needed a lot of care.

Next we were finally shown the stables, which had a small pen with three goats next to it and a pasture with ten donkeys across from it.
There were three horses, a stallion, who was in perfect condition except for some damaged skin on his snout that had been caused by tight reins, a mare, who was incredibly thin and a foal who had various medical issues, though looked perfect, the foal came from the same fair as the puppies. We were given a small talk about proper care of equine animals and about the animal health and welfare bill 2012, which will come into effect on the 6 March 2015, it means that the ISPCA will be able to confiscate any animals they feel are being mistreated without permission from a vet and the gardaí.

It was a very informative day that thought us much about animal cruelty and animal welfare. We now plan on running a fundraiser for the ISPCA by filling a jar with animal shaped sweets, chocolate and Jellies. Students can guess how many there are for €2 and the winner will get the Jar of sweets and a voucher. We are also teaching the first year classes about the ISPCA and their work.